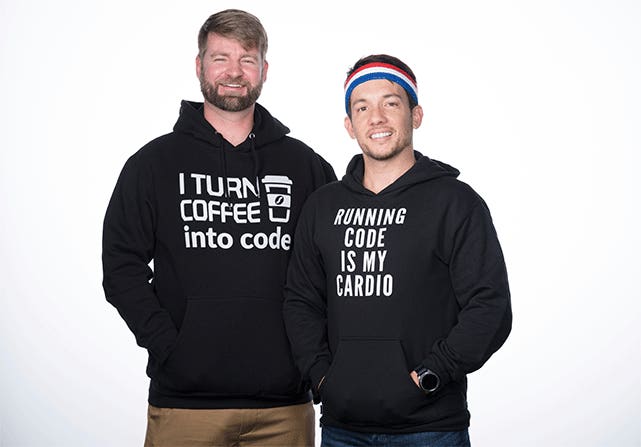 Jason Martin, 40, and Patrick Falvey, 38, are busy dads and best friends who share an unusual passion: running ultramarathons. They’re also running a fast-growing startup, AppEvolve, based in the burgeoning tech mecca of Boise, Idaho. Although their tiny business competes with companies like Google for talent, they face no shortage of the team members they need.

They’ve pulled it off taking a hybrid approach to staffing, relying on a combination of freelancers and employees, as they transition out of being a two-man business.

Martin and Falvey started the agency in late 2016 on the freelance platform Upwork, and, over time, built a team of twenty to twenty-five freelance tech professionals, all of whom work through Upwork, too. By 2020, they were ready to expand and hired their first employee, an office manager. Building their team, instead of doing all of the work of the business, enabled them to grow the company to $1.5 million in annual revenue.

They’re part of a growing number of tiny businesses that are breaking six and seven figures in revenue. Among the 5.3 million tiny businesses with 1-20 employees, the average business had just four employees and annual revenue of $816,180, with a payroll of $162,755, according to US Census Bureau statistics for 2017. (Payroll is the highest cost in many businesses.) That leaves $654,425 to cover any remaining overhead and take as profit.

Martin and Falvey met while working together at a tech startup and discovering they both loved mountain biking. As they cycled around Boise, they discovered a shared dream: running a business of their own. Noticing that there weren’t many web applications that integrated well with the customer relationship management software Salesforce—and that B2B clients were asking for it—they decided to start a business doing app development for such companies.

With orders flowing in steadily through Upwork, Falvey quit his job in early 2016; Martin followed  a couple of months later. Gradually, they branched out to offer a variety of web and mobile applications, along with hybrid applications that perform on all devices and machine learning projects, as well . They also offered consulting services.

As their business grew, Martin and Falvey had more work than they could handle on their own. To lighten their load, they gradually built a team of software developers they met on Upwork. Using that platform made it easy to onboard and pay them.

However, they still vetted everyone carefully. To make sure developers had the right combination of technical skills and soft skills to keep clients coming back, they created screening tests. For instance, for a back-end programmer role, they might ask an applicant to fill in gaps in code that was presented to them on an application they developed for testing potential hires. “It allows us to examine their thought process,” says Falvey.

Today, they may have up to twenty-five developers working for them at a time. Given today’s talent wars, the founders make sure to pay these contractors competitively. “We want them to feel comfortable and get paid what they are worth,” says Martin. They also provide benefits, even though this is not legally required. For instance, they were trying to figure out how to buy health insurance for a designer in Croatia when we spoke. “We want them to feel as secure as possible,” says Martin.

Martin and Falvey have focused on building a strong culture in the virtual company, traveling around the world to meet team members. “We don’t want to work with people we don’t know,” says Falvey. Those trips have helped them form personal bonds with their team. During COVID-19, they’ve held the company’s annual meetup, previously an in-person event, on Zoom, sending out boxes in advance that included shirts, stickers, and a cocktail mixer. “We all had margaritas, even though for Pat and me it was 8:00 a.m.,” chuckles Martin.

To maintain consistency on the team, AppEvolve has put some contractors who work regularly for the company on retainer. The company also invests in continuing education for its team and offers perks like the “Amazon Book Club” to build a company culture that emphasizes continuous learning. “If we recommend a book, we pay for it,” explains Jason.

Martin and Falvey are now working on building out the AppEvolve Network, an agency to help match clients work with talented programmers for their projects—including both permanent employees they hope to hire and freelancers, if the scope of a project is large.

Meanwhile, they had set up an extensive internal vetting process for the freelancers in the AppEvolve Network, one that includes working for at least 80 hours for the company. As they laid the groundwork, they rented an 1,800-square-foot office in Boise, intending to bring on four in-house developers.

“We want to lock them down because they are exceptional,” Martin told me. “They are extremely intelligent. The way they think through problems, interact with the rest of the team, and handle themselves with clients is really hard to find.” As they know well, a tech company is only as strong as each member of its team.

How Much Do Authors Make Per Book?