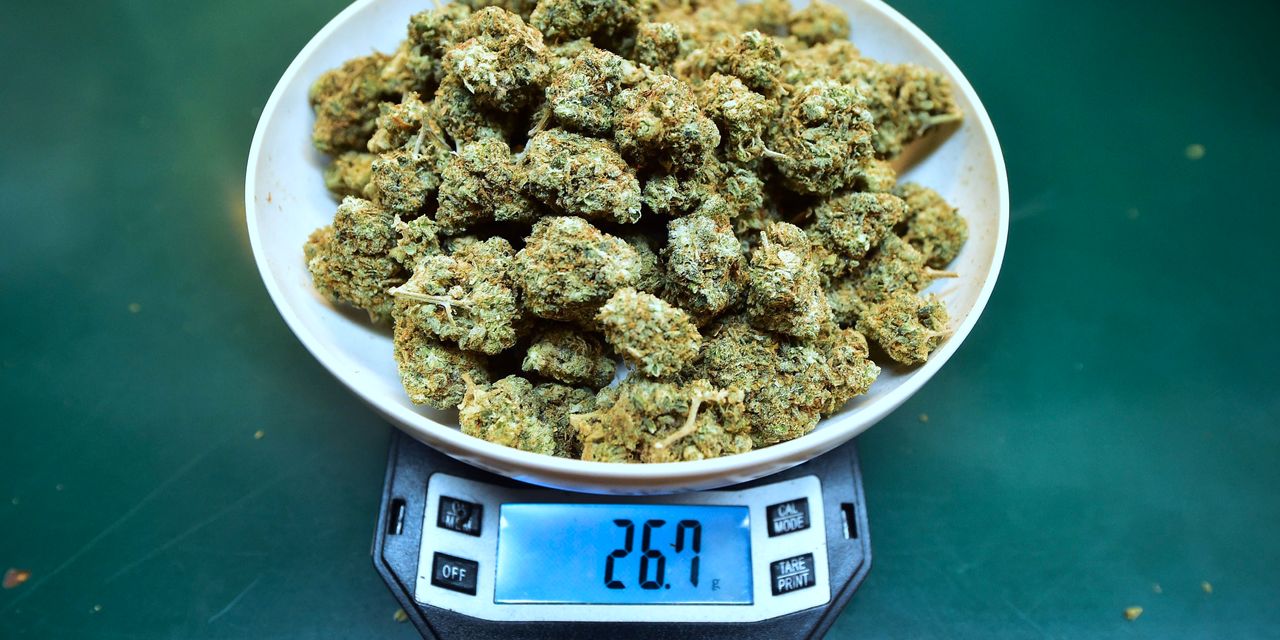 Cannabis companies look toward 2022 with plans to expand their businesses to legal markets in more states despite an expected lack of movement on the federal level to end cannabis prohibition.

As a whole, cannabis companies hope to see the New Year reverse their weak 2021 performance, even if the underlying business of legal weed has continued to pick up steam in the U.S.

Federal legalization will remain on the back burner on Capitol Hill for 2022 as well, according to industry observers.

Some hope remains, though, that SAFE Banking legislation opening up the federal banking system to cannabis companies could possibly move forward in 2022. That could pave the way for more Nasdaq listings by U.S.-based plant-touching companies such as Curaleaf
CURLF,
,
Green Thumb Industries
GTBIF,
,
Trulieve
TCNNF,
,
Ayr Wellness
AYRWF,

or Cresco Labs
CRLBF,
.
It would also eliminate the need to conduct business in cash by making it much easier for dispensaries to conduct basic financial transactions through standard bank accounts.

Meanwhile, Canadian cannabis companies such as Canopy Growth CGC, Tilray TLRY and Aurora Cannabis ACB may continue their pattern of acquisitions. Profits remain elusive because of oversupply and other challenges.

Overall, the lack of major movement in Washington dampened prospects in the sector for both U.S. cannabis companies and Canadian companies seeking to expand south of the border.

“Investors showed up earlier this year because they expected quicker progress towards legalization and left because they became disappointed,” said Alan Brochstein, founder of 420 Investor and New Cannabis Ventures. Brochstein’s Global Cannabis Stock Index shows 2021 giving up gains in the sector from the previous year, alongside negative returns in 2018 and 2019.

In the cannabis ETF world as of Dec. 15, the AdvisorShares Pure US Cannabis ETF
MSOS,

is off by about 23%, the AdvisorShares Pure Cannabis ETF
YOLO,

shrank in value by 25% and the Cannabis ETF
THCX,

Despite prohibition on cannabis at the federal level in the U.S., individual states continue to ramp up their legal cannabis markets as voters and state legislatures approve medical- and adult-use programs.

The heavily populated Northeast as well as the Midwestern states of Michigan and Illinois scaled up in 2021, with nascent businesses in each state expected to grow in 2022.

All told, the total addressable market for legal cannabis is expected to increase by 16% to $29 billion in 2021 from about $25 billion in 2021, according to estimates by the investment bank Cowen.

Looking ahead to 2022 in the cannabis sector, 420 Investor’s Brochstein said he expects another consumer packaged-goods company to make a major investment after moves by Constellation Brands
STZ,
,
Scotts Miracle-Gro
SMG,

The leading multistate operators such as Curaleaf and Verano Holdings
VRNOF,

will continue to see strong growth from a combination of organic sales increases and acquisitions, Brochstein said.

A key factor will be the timing of New Jersey’s commencement of legal adult-use sales, as well as moves by New York to start its process to issue cannabis business licenses with an eye on social equity.

Matt Melander, president and chief financial officer of Levia, a Massachusetts-based maker of cannabis-infused seltzer water, said he expects that the company’s acquisition by Ayr Wellness for a price of up to $60 million will close in early January. Levia only sells in Massachusetts now, but Ayr operates in Florida, Massachusetts, Pennsylvania, Arizona, Nevada and New Jersey and continues to expand its footprint.

“The green wave is upon us,” Melander said. “A lot of states are finally getting recreational or medical cannabis. We’ll continue to see growth of this consumer industry, regardless of federal changes.”

Kim Stuck, founder and CEO of Allay Consulting, which advises cannabis companies on regulatory matters, said she’s not optimistic about federal legalization of cannabis in 2022. But the business is expanding in New Jersey and New York, while states such as Michigan continue their ramp-ups.

While Congress may not act, it’s possible that other parts of the federal government may wade into the cannabis or legal hemp space. The U.S. Food and Drug Administration has been asked to provide guidance on CBD as a nutritional supplement or food ingredient but has yet to act.

Stuck said she supports CBD’s being regulated as a supplement or food so it’s more widely available than pharmaceutical products. “The [FDA] has been saying they’re going to do this for almost three years now, and it’s really concerning,” Stuck said. “If you look at things on the shelf, you assume that the government is regulating them, and they’re not. And I don’t think consumers know that.”

On this front, an industry group called the Council for Federal Cannabis Regulation, or CFCR, on Dec. 12 sent a letter to Secretary of Health and Human Services Xavier Becerra, requested a meeting “to address an escalating public health and safety crisis in the U.S. affecting children, vulnerable populations, and the general population” resulting from the presence of unregulated CBD products on the market.

The FDA has pointed to an existing drug exclusion rule, or DER, that prevents CBD from being regulated as a food additive or food ingredient. The FDA currently regards CBD as a drug because it’s the active ingredient in the seizure medicine Epidiolex from Greenwich Biosciences.

The CFCR said it would provide the FDA access to confidential toxicology studies being conducted on CBD products in the European Union and the U.K.

“CFCR believes this information can accelerate FDA’s ability and timeline to regulate CBD, but not without first obtaining an administration waiver of the drug exclusion rule (DER) to allow the FDA to proceed,” said the Dec. 12 letter from Sheri L. Orlowitz, chair of CFCR.

James Ontiveros, CEO of WeaveIQ, a software provider for cannabis companies based in Boulder, Colo., observed that 2021 was a challenging year as businesses worked to attract customers during the pandemic and invested money to beef up their online presences.

“More time at home gave people reason to reconsider their preconceived notions about cannabis and spur them to try it,” Ontiveros said. “There were significant spikes in online ordering, curbside pickup, and overall demand. We don’t expect these trends to die down any time soon.”

This Growth Stock Has Market-Beating Potential