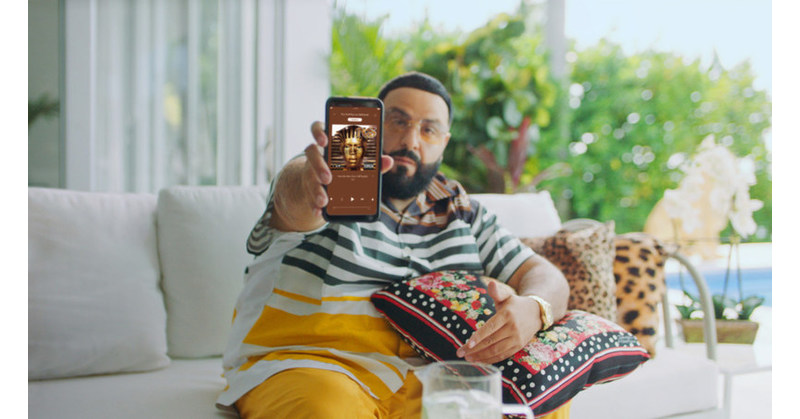 All three of the new Pandora ad spots starring Khaled (including two with Jamaican dancehall artist and collaborator Shenseea) will make their television premiere on BET during the 2021 Soul Train Music Awards on November 28 as part of a multichannel national media campaign across OTT, cable, broadcast, online, social, outdoor, and audio on Pandora and SiriusXM.

The genesis of the campaign, which was produced in collaboration with independent creative agency Translation, came from a video of DJ Khaled spontaneously hyping Pandora at a backyard party, where he revealed that the music playlists that partygoers had been loving were actually a selection of his favorite Pandora stations – including Evelyn “Champagne” King Radio, Nas Radio, and Drake Radio. “I usually have to program my own playlists,” Khaled proclaims. “But Pandora does such a great job!”

The video made its way to Scott Greenstein, President and Chief Content Officer of SiriusXM, the parent company of Pandora, who was taken by Khaled’s sincere and predictably outspoken endorsement.

“It was a completely heartfelt and spot-on expression of what makes Pandora so special – that feeling of having thousands and thousands of music stations at your fingertips that are programmed just for you,” says Greenstein. “When DJ Khaled loves something, he loves it with every fiber of his being, and I knew that we had to try and capture his authentic passion for Pandora and share it with the world.”

“This campaign allowed us to take one of the most recognizable voices in music and culture and find a real connection with an up-and-coming new artist to illustrate the way that Pandora plays the right songs for any moment,” said Jason Campbell, Head of Creative at Translation. “With her connection to Khaled’s dancehall past and her embodiment of what’s next for female artists, Shenseea was a perfect partner for Khaled to help articulate why Pandora’s personalized listening experience is so unique.”

The first ad in the series, “Right Song,” is a reproduction of the organic video that initially sparked the campaign. In it, DJ Khaled animatedly tells an off-camera friend that the music playlists that his guests love so much are actually his favorite Pandora stations. “When Pandora’s playing, it sets moods,” he says with trademark flair. “It sets energy. It inspires me to make music. It’s incredible!”

In the campaign’s second spot, “Modes for Every Moment,” Khaled demonstrates Pandora’s “Modes” station customization feature to Jamaican dancehall artist and collaborator Shenseea, showing how it can be used to create several different musical “vibes” within a single Pandora station. Pandora Modes let users fine-tune their listening experience by choosing from selectable “modes” on their favorite stations, giving them more control over the types of songs they hear.

In the third spot, “What’s Next,” DJ Khaled tells Shenseea how Pandora’s “Deep Cuts” mode has introduced him to great new music by playing artists and songs that he might not ordinarily hear on his favorite stations and reveals (to her surprise) that he originally discovered her on Pandora!

“DJ Khaled embodies the passion that listeners have for Pandora – the way it makes it so simple to enjoy their favorite artists and songs, and discover new music to match the energy of what they’re feeling in the moment,” says Kimberly Wilson, SVP of Brand and Advertising for SiriusXM, the parent company of Pandora. “This campaign harnesses his longtime enthusiasm for Pandora in a truly authentic and infectious way.”

Pandora’s new campaign starring DJ Khaled also includes a special “The Pop-Up: DJ Khaled” mode on Pandora where he shares with listeners the songs and artists who have shaped his personal musical journey, along with other influences, inspirations, stories, and more. The Pop-Up: DJ Khaled mode is available on Pandora starting today on DJ Khaled Radio and Top Shelf Rap and R&B Radio.

About Pandora Pandora, a subsidiary of SiriusXM, is the largest ad-supported audio entertainment streaming service in the U.S. Pandora provides consumers with a uniquely-personalized music listening experience via its proprietary AI-driven Music Genome Project® recommendation technology. Pandora is also the leading digital audio advertising platform in the U.S. Through its own Pandora service, its AdsWizz platform, and third party services such as SoundCloud, the Company connects brands to the largest ad-supported streaming audio marketplace in the country. Pandora is available through its mobile app, the web, and integrations with more than 2,000 connected products.

About TranslationNamed Ad Age‘s 2021 Small Agency of the Year, Translation is an independent creative agency built to help ambitious brands harness the power of culture to solve their biggest challenges. For over 15 years, Translation has partnered with brands and creators to build and grow disruptive platforms that foster deeper community engagement. This experience has given us unparalleled insight into the dynamics of culture and affinities that link people together. Backed by Alphabet, Andreessen Horowitz, and 21st Century Fox, we are reimagining how brands and artists tell their stories, create value, and push culture forward.

Will There Be Libraries in 25 Years? | Time - TIME