It’s difficult to make a list of “great stocks to buy” that would satisfy everyone. Investors have different needs, goals, preferences, and risk tolerances, making a one-size-fits-all investment strategy impossible. But at the very least, most would agree that it’s helpful to consider buying stocks that are likely to outperform the market in the next year and beyond.

That is why I picked Vertex Pharmaceuticals (NASDAQ: VRTX) and Novavax (NASDAQ: NVAX) as two great stocks to buy right now. Both companies are riding tailwinds that will drive strong financial results, and, potentially, market-beating performances. If you happen to have $5,000 handy that you aren’t saving for a rainy day, investing in either of these companies would be a great move for the long-term.

Biotech giant Vertex Pharmaceuticals has lagged the broader market this year, but the company seems to be on the rebound. In the past three months, the drugmaker’s shares have climbed by 22% — compared to the S&P 500‘s gains of 10%. What’s going on with this company? Let’s start with the bad news. Vertex Pharmaceuticals has held a monopoly on drugs that treat the underlying causes of cystic fibrosis (CF) for nearly 10 years.

This dominance helped Vertex crush the market over the decade, but as it made headway into the relatively small number of CF patients in North America, Europe, and Australia — roughly 83,000 people — investors have gotten worried that this tailwind won’t last that much longer. Meanwhile, the company also suffered from clinical setbacks.

In October 2020, it had to halt the development of a medicine for alpha-1 antitrypsin deficiency (a genetic condition that can affect the lungs and liver) because of the drug’s safety issues. Now for the good news: Vertex Pharmaceuticals has several promising pipeline candidates that could replace its current lineup of CF drugs. On Dec. 1, the company reported data from a phase 2 clinical trial for VX-147, a potential treatment for a rare genetic kidney disorder called APOL1-mediated focal segmental glomerulosclerosis. 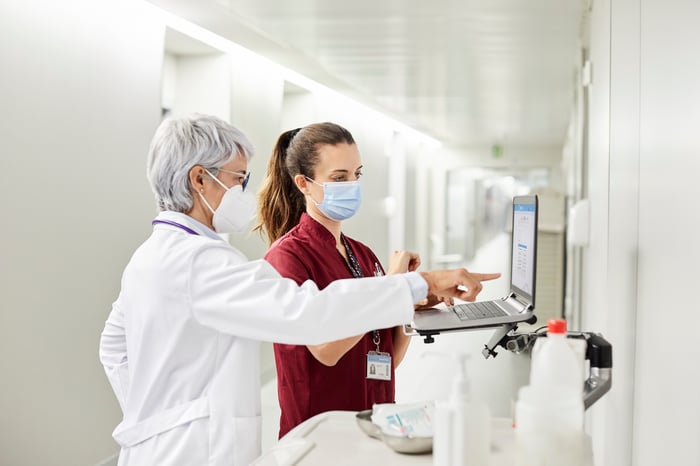 In October, the company announced positive data from a phase 1/2 clinical trial for VX-880, a potential therapy for type 1 diabetes. To be fair, both of these programs still have a long way to go. But they aren’t the only ones in the company’s arsenal. Vertex is developing CTX001 in collaboration with CRISPR Therapeutics. CTX001 is a potential gene-editing therapy for sickle cell disease and transfusion-dependent beta-thalassemia, two rare blood diseases with few safe and effective treatment options.

Vertex Pharmaceutical plans to submit an application to regulatory authorities for CTX001 by the end of 2022. Last but not least, Vertex’s dominance in the CF market will continue to drive revenue growth for at least a little while longer. While the company’s current lineup of drugs can treat 90% of patients, only half of those eligible are receiving treatment so a growth runway remains.

In the third quarter, Vertex’s revenue jumped by 29% year over year to $1.98 billion. Solid top-line growth coupled with promising pipeline candidates should allow Vertex’s stock to stage a strong comeback in the next year and beyond.

The COVID-19 pandemic continues to throw curveballs our way. After the delta variant of the coronavirus appeared, the omicron variant is now spreading rapidly. It seems the need for COVID vaccines won’t subside anytime soon. That’s why Novavax looks like an outstanding stock to buy right now.

The company’s COVID-19 vaccine, NVX-CoV2373, proved roughly 90% effective overall and 100% effective against severe cases of the disease. True, the company’s phase 3 studies were conducted before the omicron variant surfaced. The same is true for most vaccines in circulation. Booster doses of these vaccines could confer some degree of protection against omicron. That’s an idea Novavax and other biotechs are currently exploring.

Novavax recently started a phase 3 study to test the safety and efficacy of a third dose of NVX-CoV2373. Also, the vaccine recently earned authorization in the European Union, India, and the Philippines. It will likely earn many more regulatory nods in the coming months, including in Singapore, the U.K., Canada, and Australia. Those regulatory green lights will provide catalysts for Novavax’s stock to soar even higher.

While the company is still not profitable, it is well on its way to see green on the bottom line. Novavax could easily rack up several billion dollars in sales next year thanks to its COVID-19 vaccine candidate. In the long run, Novavax still has its NanoFlu vaccine — a potential flu vaccine for adults 65 and older — in its arsenal. NanoFlu took a back seat as Novavax turned its focus to COVID-19, but this candidate has already posted solid results in a phase 3 study and could well drive growth in the future.

The company has several other promising programs in its pipeline. With both short-term and long-term catalysts on the horizon, Novavax looks like an excellent biotech stock where an investment of $5,000 today will likely pay off over the years.

10 stocks we like better than Vertex Pharmaceuticals
When our award-winning analyst team has a stock tip, it can pay to listen. After all, the newsletter they have run for over a decade, Motley Fool Stock Advisor, has tripled the market.*

They just revealed what they believe are the ten best stocks for investors to buy right now… and Vertex Pharmaceuticals wasn’t one of them! That’s right — they think these 10 stocks are even better buys.

Which laws go into effect in January in North Carolina